Welcome » What we have found out so far?
Printable version
Patients' Stories

What we have found out so far?

Work funded by the Wegenerâs Trust has been published in peer reviewed journals.Â  The links will take you to the scientific abstracts.Â  The findings are summarised in the text below each one.

One treatment for Wegenerâs granulomatosis is the depletion of B cells by the drug Rituximab. This study investigated T cells that are key regulators of immune responses following B cell depletion therapies.Â Please click here for the published paper.

This study demonstrated that B cell depletion therapy by Rituximab affects the immune regulatory networks that support the development of autoimmune symptoms in GPA. In layman terms, T regulatory (TREG) cells are the âpoliceâ that control the immune response by suppressing B cell proliferation. T follicular helper (TFH) cells are the âcheerleadersâ which have been implicated in autoimmune conditions by permitting the survival of autoreactive B cells. The frequencies of TREG are lower and TFH higher in GPA patients, but are restored to normal levels following successful treatment with Rituximab.Â This study provides the basis for further investigation in the currently funded work.

Characterisation of the nasal lesions in Wegenerâs granulomatosis (GPA).Â Please click here for the published paper.

We can see clusters of B cells and clusters of plasma cells side by side in the nasal tissue from patients with Wegenerâs granulomatosis or GPA (Figure A).

First of all we located B cells and plasma cells in the nasal lesion of patients with GPA.Â  The image below represents a slice through a piece of nasal tissue from a patient with GPA.Â  The slice is so thin that we can see the cells that are in it under the microscope and we use special dyes to identify different cell types.Â  In the photograph the B cells are pink and the plasma cells that make antibodies are brown.Â  They tend not to mix together but sit side by side. 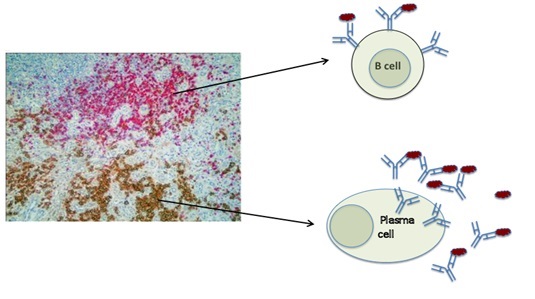 Although the B cells are not mixed up with the plasma cells, we can see that they are mixed together with neutrophils.Â  Neutrophils are known to be the target of autoantibody ANCA (Figure B). 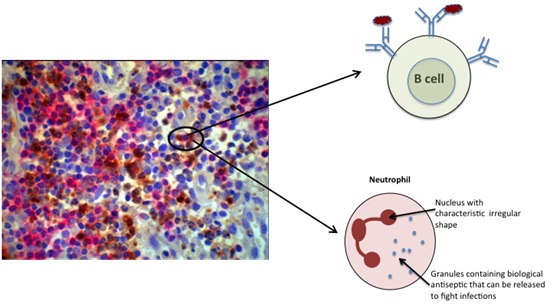 The granulomas in Wegenerâs granulomatosis (GPA) make a factor called APRIL that promotes B cell survival and activity.

A granuloma is a cluster of macrophages (as shown in Figure C, right). Â Â It looks like a little ball in the tissue slice that has been identified with a dotted circle in the photograph below.Â  (Figure C, left).Â  The brown dye in the tissue slice is targeted towards APRIL, which is a factor that supports the survival and activity of B cells.Â  This suggests that the granuloma themselves may have a role in driving the autoantibody production in GPA.

B cells in the nasal mucosa in Wegenerâs granulomatosis (GPA) stay put for a very long time.

When B cells become activated they can divide and grow as clones. We can identify individual B cells and clones derived from them because they carry their own special tags that are only shared between members of a clone.Â  We located B cell clones in a series of biopsies taken from a patient with GPA as part of clinical management over time.Â  We have seen that the clones can stay in the nasal mucosa rather than circulating in the blood and also that the clones can persist in the nasal mucosa and upper airways for a very long time (years).

We believe that the work described above highlights the importance of understanding the nasal mucosa and upper airways in the development of autoantibodies in GPA.

B cells that circulate in the blood and that express antibodies (see current research page) are originally made in the bone marrow.Â  The process of making B cells involves the creation of random DNA sequences in the antibody genes.Â  This could allow the B cells make antibodies that bind to self antigens if not tightly regulated. Regulation of this process is important to screen and prevent the production of autoantibodies in diseases such as Wegenerâs granulomatosis.Â  The process in humans is not understood.Â  This study investigated the normal consequences of screening antibodies on the populations of B cells that subsequently enter the blood.Â  It was a collaboration with PhD student Louise Fraser who studied systemic lupus erythematosus who shared the first authorship of the paper.Â Please click here for the published paper.

This study identified that as B cells develop, many antibody genes are created but then rejected. As a consequence, B cells carry far more created antibody genes than they actually use.Â  We were able to identify the types of gene sequences that are favoured and those that are rejected.Â  This demonstrates that a process in the bone marrow must screen and reject many antibodies.Â Â  It also shows that the processes that regulate which genes can be actually expressed as antibodies out of all those that are made is very important.

This process was found to be defective in SLE.Â  It would be interesting to observe how this process functions in GPA in the future.