It started at the beginning of September last year, 2008, two days before we went on a weekâs holiday with four very good friends. My husband, David, announced he had a bad earache and he obtained some antibiotic eardrops before we flew out to Majorca. Whilst there, however, the pain increased and a local pharmacy gave him a course of antibiotic tablets.

On returning home, he was prescribed a further two courses of antibiotics by our doctor but still the pain continued and he was referred to an ENT Consultant in London. After several tests and scans, the consultant booked him into the King Edward VIIâs Hospital for what should have been a straightforward 20 minute procedure to drain the infection, but which in fact lasted over an hour. We were told afterwards that the infection was like nothing the doctors had ever seen before. Although the extreme earache, from which David had now suffered for over ten weeks, calmed down, his eardrum was still inflamed and he began to suffer from cold symptoms followed by acute sinusitis.

The symptoms continued for several weeks. The sinusitis persisted and the pain worsened. He also began to feel unwell generally, with increasing weight loss â about 2.5stones in three months â and lethargy. He was aware of profound tiredness, increasing weakness and being less steady on his feet. He also complained of constant nausea and consequently had little appetite.

In mid December, he was referred to a Consultant Physician at St Thomasâ Hospital. After examining David, the physician suggested he could be suffering from pneumonia and referred him to a Consultant Chest Physician at our local hospital – Mayday in Croydon. An appointment was made for the end of December.

Last Christmas – one of Davidâs favourite times of the year – was a quieter affair than usual. We still had 12 round the dinner table and David did his best to join in with the fun but it was a struggle and he had to return to bed every couple of hours to rest.

David spent most of the following three days in bed and on the 29th December he attended his first appointment with Dr Loke, the consultant at Mayday, who arranged for a CT scan to be taken and a bronchoscopy to be performed. On 21st January, by which time David was also showing signs of Reynaudâs Phenomenon, Dr Loke diagnosed David as having Vasculitis, probableÂ Wegenerâs Granulomatosis, but he needed to take an ANCA blood test and a nasal biopsy to be 100% sure. The blood test was positive and David was booked in for the biopsy on Monday 2nd February.

On that Monday morning we awoke to two feet of thick snow! Davidâs procedure was one of only a few able to be carried out that day after which he was admitted on to a ward and in the evening was given the first of three IV infusions of methylprednisolone. I sat with him on the following day for the second infusion, and it was almost as if he was getting better in front of my eyes. He said he felt euphoric! He was discharged that day and went back as an outpatient on the Wednesday for the final infusion.

David attended Dr Lokeâs clinic the following week and, although the results of the nasal biopsy had not proved conclusive, we were told that the diagnosis of Wegenerâs remained solid and he was prescribed with 50mg Cyclophosphamide and 50mg Prednisolone daily with the instruction to have weekly blood samples taken at our surgery. 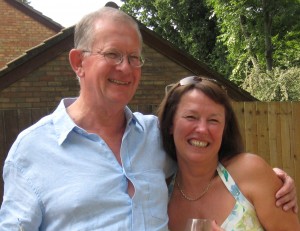 The next three weeks were great!Â  For the first time in months, David felt well, regained his appetite and energy and visibly put on weight.Â  Life seemed to be back on track!Â  He was able to work in the garden, visit friends, restart his duties as a churchwarden and continue with the charity work in which he had been so involved.

Sadly, however, this improvement was short lived and at the beginning of March David began to suffer from nausea and severe headaches running down behind his left ear.Â  He was given a variety of different painkillers and struggled through a difficult month which happily did include one wonderful weekend at the end of the month when our daughter returned home from Dubai as a surprise for my birthday.Â  We celebrated by lunching with the family and then dined at a local restaurant in the evening.Â  This later proved to be our last meal out together.

David then began to experience numbness on the left side of his tongue and, after a desperate letter to Dr Loke asking for help, he was admitted into Mayday on 15th April for various tests including an MRI and CT scan of the brain, a lumber puncture and an ANCA blood test.Â  The tests, however, revealed nothing significant and David was discharged a week later with instructions to take an increased dose of steroids for five days.

I kept a chart of Davidâs progress during this period.Â  The headaches were certainly less severe and the numbness in his tongue less obvious, but he spent a lot of the time in bed, experiencing hot sweats during the night and suffering from nausea and vomiting.Â  He was eating very little and was again losing weight.

I felt at this point that Mayday Hospital did not have the necessary expertise to control whatever was happening in Davidâs body and I therefore researched the internet and asked several friends and contacts if they knew of anyone who could help.Â  I was recommended Dr DâCruz at St Thomasâ and asked Davidâs doctor to write a referral letter whilst keeping my fingers crossed.Â  I also informed Dr Loke of what we wished to do and he was supportive of our decision.

Then, early on the morning of Saturday 2nd May, after a very confused and restless night at home, David collapsed.Â  I called an ambulance which rushed him back into Mayday and he was re-admitted on to Dr Lokeâs ward.Â  It was a bank holiday weekend and so he was not seen until the following Tuesday by Dr Loke who noted his confusion, increased weight loss and also that he was losing his voice and having difficulty in swallowing.Â  He had palsy in several of his cranial nerves, most notably nerves 7, 8, 9 and 12, which the doctors believe was caused by pressure from the inflamed dura at the base of his brain.

That Friday evening we were given the news that Dr DâCruz had accepted David as a patient and he was transferred up to St Thomasâ by ambulance on Saturday morning, 9th May.Â  Dr DâCruz actually came into the hospital that afternoon to examine David himself and confirmed that the diagnosis of Wegenerâs Granulomatosis was correct.

The first week in St Thomasâ was very difficult for David as he was confused and distressed and it was agreed that I should be allowed to come into the hospital in the mornings â visiting hours were usually only during the afternoon â in order to be with him for the full day which was a great help.Â  Since David was unable to eat, an NG feeding tube was fitted and later replaced with a PEG directly into his stomach.Â  He was also prescribed with insulin to control the sugar levels in his blood.

The days passed and in the middle of the second week David was given the first of six fortnightly infusions of cyclophosphamide and was told he would be discharged at the end of the following week.

However, that weekend, Spring Bank Holiday, David caught pneumonia.Â  He was very poorly for the next ten to twelve days and could not be discharged.Â  His second infusion of cyclophosphamide was delayed until Friday 5th June, when the pneumonia had cleared, and his discharge was rescheduled for the next Monday.Â  However, on the day after the infusion and with his immune system at nil, David once again came down with pneumonia and, once again, could not be discharged.

At the beginning of the following week, David was very tired, with high blood pressure and a very high heart rate.Â  The doctors were concerned enough to transfer him to intensive care where they managed to control his heart rate and he soon again began to show signs of improvement.Â  My daughter, son and two stepsons all came to the hospital and were able to spend precious time by his bedside.

Then, early on Friday 12th June, Davidâs health suddenly deteriorated and he could not breathe.Â  Attempts to resuscitate him failed.Â  Although David was very ill, his unexpected death came as a great shock not only to his family but also to Dr DâCruz and his team, who later carried out a post mortem examination in order to learn just what had happened.

The St Thomasâ Wegenerâs Trust has been formed to raise awareness of the disease and to raise funds for desperately needed research.Â  Perhaps, if there was more known about this illness, David would still be here with us today.