My Dad, William Newton, Â was born in 1944 in Wallsend, a suburb of Newcastle. Â He was a superb father to me and my brother Andrew, husband to my Mum, Beryl, and Granddad to my two kids, Thomas and Millie Â who were 3 and 6 when he passed away. Â He worked hard all of his life starting his adult life in the Rising Sun Pit in Wallsend before leaving to join the police force, where her served with great distinction until his retirement in the mid 1990’s.

He retired early on health grounds, having been diagnosed with Rheumatoid arthritis. Initially, I wouldn’t say it had a massive impact on his life. Â He had to give up coaching the village football team, where he had been a stalwart for 10 years or so, and every so often he would have spells of fatigue and soreness. Â But my Dad never complained, he never talked about how he felt and he certainly never shared he suffering with us, his family.

And so the story went on for the next 12 or more years. Â My Dad had arthritis, he got tired easily, but he lived with it and his painkiller kept him able to function. Â  In fact, it was only about 3 months before he died that we ever heard the words Wegener’s Granulomatosis mentioned. Â He kept it from us. Â We have no idea when he was diagnosed, because he didn’t want us to worry, he didn’t want us to fuss and he certainly didn’t want us to share his pain.

I got a call one day to say that my Dad was going into hospital to have a few test run as he was getting very very tired and maybe needed a change of medication. Â That was the Wednesday, I took him to the hospital and he was laughing and joking, as he always was, I never thought it would be the last time I would see him without a oxygen mask on. Â I went on holiday with my family on the Saturday and returned the following week. Â I had spoken to my Mum while I was away and she told me that there had been good news, the doctors had found a virus that was making him sick and they were working on him, so he would be fine.

So I turned up at the hospital on the Sunday to show him my holiday pictures and catch up. Â When I got to his room, the bed had gone. Â I asked where he was and the nurse told me he had just been taken to the HDU. Â He had suffered a massive heart attack. Although it looked like he was pulling through, Â two days later he had another heart attack and died. Â  His cause of death was given as pneumonia, brought on through difficulties derived from Wegener’s Granulomatosis. 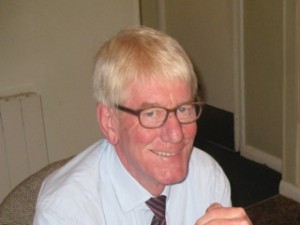 There isn’t a day goes when I don’t wish that I had spoken to him more, helped him more and understood what he was going through, seemingly alone. Â I wish I could have done more, but its too late, so I have to do the best I can. Â I’m trying to help others understand this condition and Im trying to stop others going through what we have had to.

I love you Dad.
x