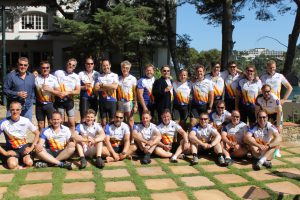 When Alice Benkert died of Wegener’s granulomatosis in 2010, her family were determined to help other sufferers. Wegenerâs is a rare but incapacitating disease which causes severe inflammation of the blood vessels and can result in major damage to the lungs, kidneys and other vital organs.

Her brothers Jules and Ollie Benkert wanted to do something in Aliceâs memory, raise funds and increase awareness of the disease.

âWe were led to believe by some of the experts in the field that although Wegenerâs remains very hard to diagnose, with funding available for key research, treatment may become available quite quickly,â says Jules.Â âSo being able to make a difference or even âfind a cureâ seems to be within reach.â

With that aim, the family have raised a truly astonishing Â£270,000 for research at St Thomasâ â an amount which has wildly exceeded their expectations.

To mark the first anniversary of Aliceâs death, they organised a sponsored bike ride from Esher in Surrey, where Alice lived, to Mumbles in Wales, one of her favourite places. Approximately 25 of Aliceâs family and friends took part in the 200-mile cycle, raising Â£130,000.

Five years on, the family organised a sponsored bike ride across the Pyrenees from Barcelona to Alice’s favourite holiday location, the Aigua Blava Hotel on the Costa Brava. 25 of them, many from the original team, undertook the 200km ride on 18th May 2016 with more than 3kms in vertical climbing (on bikes) in over just 2 days. They raised Â£140,000.

âAthletic ability was very diverse but the consistent factor was that every participant knew Alice and the family and was ready to help,â says Ollie. âThe length of this challenge was sufficient to grab many friends of friendsâ attention and so the fundraising effort beat many of our expectations.â

For others wishing to fundraise for Guyâs and St Thomasâ, Ollie suggests aiming high, âespecially with people who are close or even one step removed. The impact of these events if they have a personal touch can be meaningful.â