âIf our study is positive, we hope that hydroxychloroquine, an old fashioned and sa... Read on

“Once, a long time ago, in a life I’ve practically forgotten, I thought it might be a nice thing to run a marathon oneÂ day… ” Â And nowÂ Antonia Hancocks, mother of four, the least athletic person on the planet, has somehow got to get herself to the point where she can run a marathon.

Then on 17th April 2011, “I did it! Although I failed to discover my inner runner, in spite of all the training, I completed the London Marathon yesterday. Thank you to everyone who has sponsored me, sent good wishes, who turned up and cheered – it was all crucial in getting me round.” 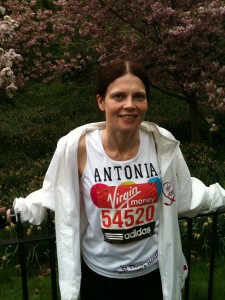 Antonia has raised over Â£20,000 for the Wegener’s Trust.

On 21st April 2013, Arnaud Feyrignac, the Au Pair of James and Antonia, ran the London Marathon for the Wegener’s Trust in an impressive three hours 50 minutes.