A marathon for Mick

On Sunday 19 April, Richard Brown ran the Greater Manchester Marathon in memory of his brother-in-law, Mick. Mick sadly passed away last year from Wegenerâs Granulomatosis, an autoimmune disease that causes organ failure. He raised an astoundingÂ Â£5,000 for Guyâs and St Thomasâ Wegenerâs Trust which is undertaking research into the causes of the disease.

After losing their beloved Mick, Richardâs whole family wanted to do something together to remember him.

âMick was such a fit and healthy 50-year-old, and then he was diagnosed with this awful illness. He was strong and determined to fight it, but in the end, the treatment he had wasnât enough. He passed away on the 12th May 2014, with his close family and myself around him.

âHe left behind his wife and two daughters aged 22 and 17. We knew that nothing could bring Mick back, but if we could help by raising money to fund research into this illness, then perhaps in the future we can stop other families going through what we had to.â

Richard has always been a keen runner and has attempted the London Marathon before, but it had to be put on hold when he sustained various injuries.

This time, he struck the balance right and was able to complete the Greater Manchester Marathon without too much trouble â although he couldnât walk up the stairs at work the day after!

The race went really well and Richard finished with a time of 3 hours 6 minutes â easily beating his target of 3 hours 10 minutes.

Richard says, âI had to change my whole eating habits and basically plan my life around runs, but seeing the amount of money we managed to raise and thinking about how proud Mick would be of me is got me through it.

âA lot of my family came over with me for support and were cheering me on â just what I needed in those final few miles.â 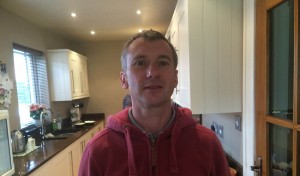 This entry was posted on Wednesday, July 1st, 2015 at 8:46 am and is filed under Fundraising News.